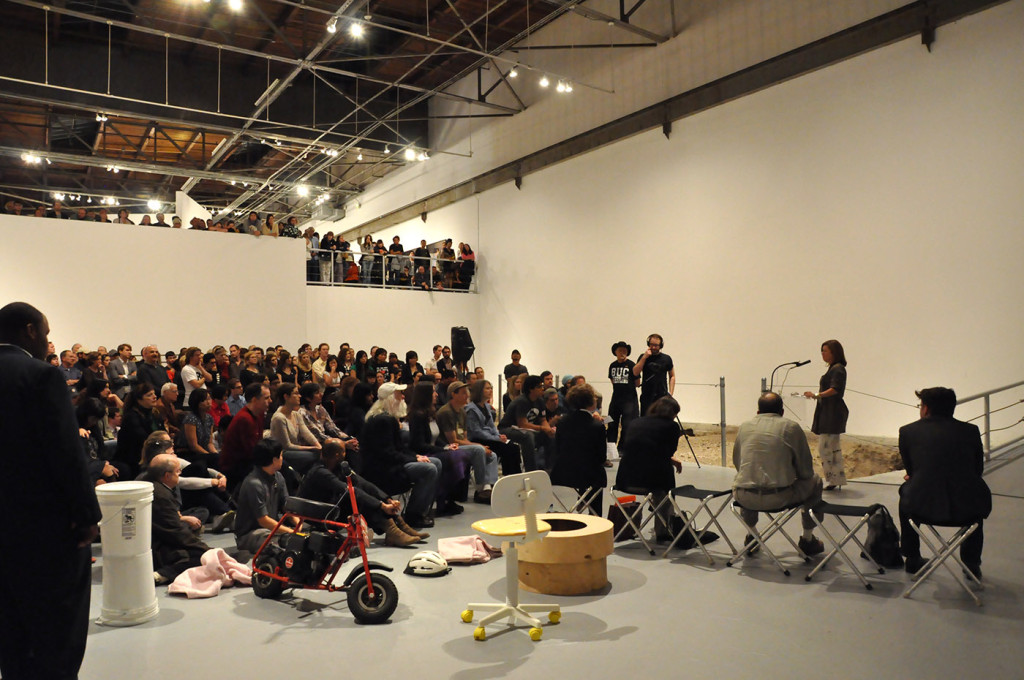 MOCA Mobilization was co-founded by Cindy Bernard and Diana Thater in November 2008. The primary press release statements from 2008 and 20012 are below. More info can be found at mocamobilization.org and here in the journal.

IN SUPPORT OF THE MUSEUM OF CONTEMPORARY ART, LOS ANGELES, November 23, 2008

Organized by MOCA Mobilization, an independent community group formed to support the Museum and its staff.

On November 19th 2008, the public was informed via an article in the Los Angeles Times that the Museum of Contemporary 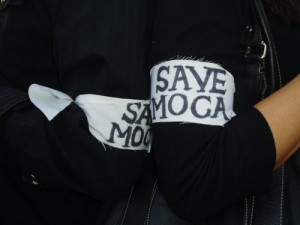 Art, Los Angeles has for some time been in a grave financial crisis and extreme measures were about to be taken with regard to the institution and its collection. With the museum in even greater trouble as rumors and partial truths fly, we, the undersigned, make the following public statement:

MOCA has an incomparable reputation. Widely regarded as the single best contemporary art museum in the world, its exhibitions have become art history. Since 1979, MOCA’s reputation has attracted the admiration of internationally renowned artists and patrons of the arts. It is one of
Los Angeles’s great cultural institutions.

We support MOCA’s staff as they suffer through this crisis. It is their work, their talent and their integrity that give the luster to this Museum. We acknowledge with pride the exceptional quality and quantity of ground-breaking exhibitions produced by MOCA. We appreciate the excellence of its permanent collection. For any one of these things to be diminished is to diminish the entire institution.

We are a vigilant public who care for the integrity and autonomy of MOCA. The Board of Trustees is the guardian of this great institution. It is the Board’s responsibility to insure the Museum’s financial health and preserve its programming and staff. We call upon the Trustees to maintain MOCA’s independence and to keep its collection intact and accessible to a wide and appreciative public.

STATEMENT IN SUPPORT OF THE MUSEUM OF CONTEMPORARY ART, LOS ANGELES, JULY 24, 2012

Organized by MOCA Mobilization, an independent community group formed in 2008 to support the Museum and its staff.

1.We demand that a search begin within 3 months to fill the key role of Chief Curator vacated by the forced resignation of Paul Schimmel and the Senior position vacated by Philipp Kaiser and that these positions be filled by experienced and respected curators who can provide the needed and necessary leadership roles at the museum. MOCA leadership has indicated that it does not intend to fill the currently vacant Senior and Chief curatorial positions. In-depth research and development, a thorough knowledge of the permanent collection and a considered approach to acquisitions requires the guidance of senior curatorial staff not burdened with fundraising and running the day-to-day operations of the museum. As stated in the Considerations for AAM Accredited Museums Facing Retrenchment or Downsizing: “Actions that are inconsistent with standards and best practices in the field, or with the criteria and characteristics of an accredited museum, include: Major staff cutbacks, protracted vacancies in key professional positions, or major changes in qualifications of staff that adversely affect the museum’s ability to fulfill its mission.”

2. We demand that the Board of Trustees recognize the historical importance of artists to MOCA and the need for continuing involvement of artists in museum governance. This must be acknowledged by the appointment of four new artist trustees, to replace the four who have resigned in protest, and by appointing an artist to the Executive Committee of the Board of Trustees. MOCA’s relationship with the artist community at its core is broken. Artists were a driving force in the founding of MOCA, have sat on the Board of Trustees, sold works to support operating expenses and programming, donated works to the permanent collection and rallied to keep MOCA independent during the 2008 crisis. Artists are vital to the life of the Museum and the artist trustees must remain informed. As Barbara Kruger and Cathy Opie said in their resignation letter to the museum: “This requires honest and shared communication involving all the Board Members, not just a select few.”

3. We respectfully ask that MOCA’s Trustees examine their own role in contributing to the financial crisis in 2008 and the current turmoil rather than placing the blame on MOCA’s internationally recognized programming. The Board has named programming as the source of MOCA’s troubles and has inferred that MOCA’s internationally renowned record of exhibitions is irrelevant and elitist.

4. We demand that the Board of Trustees honor their role as custodians of MOCA, seek to educate themselves in non-profit governance as required by the Attorney General and act in the public interest in their stewardship of the museum. The Board of Trustees must be the ethical, financial custodians of MOCA and, as such, have fiduciary responsibilities that are specific to non-profit institutions. We are concerned that, despite the 2010 recommendations of the Attorney General who wrote that MOCA “required corrective actions,” they have not complied.

5. We continue to believe that an independent advisory panel comprised of museum experts, collection artists and community members with experience in non-profit governance is necessary to insure the integrity of MOCA’s unique curatorial voice and its status as a world-class museum.  We demand that an advisory panel be formed to insure transparency at MOCA.  In 2008, MOCA Mobilization supported the participation of the Board of Trustees in a public review process as recommended by Antonio Villaraigosa, the Mayor of Los Angeles. Though a panel may have been convened, the public was never made aware of their findings.

We remain a vigilant public who care for the integrity and autonomy of MOCA. The Board of Trustees is the guardian of this great institution. It is the Board’s responsibility to insure the Museum’s financial health and preserve its programming and staff. We call upon the Trustees to honor MOCA’s mission statement:

Founded in 1979, The Museum of Contemporary Art (MOCA) is the only museum in Los Angeles devoted exclusively to contemporary art. It is committed to the collection, presentation, and interpretation of work produced since 1940 in all media, and to preserving that work for future generations. In a remarkably short time, MOCA has developed one of the nation’s most renowned permanent collections. Now numbering over 5,000 works and steadily growing, this invaluable cultural resource provides extensive opportunities for education and enjoyment to thousands of national and international visitors. Today the museum is housed in three unique facilities: MOCA Grand Avenue, The Geffen Contemporary at MOCA, and MOCA Pacific Design Center. MOCA’s mission is to be the defining museum of contemporary art.