Periodically, we hear complaints (or alternatively, sighs of gratitude) from one quarter or another that painting is dead; or sometimes more specifically, that abstract painting is dead. At this point it’s far more likely the planet will die before abstract painting. Not exactly the cheeriest thought – but I get it. Today, as we face hard realities pitched somewhere between the Alien and Scary Movie franchises, artists appear once again to be veering in an abstract direction. The difference is a certain material specificity that connects with motive, while both deconstructing or dissolving that materiality and transposing or reconfiguring it into something entirely different – not a new ‘reality’ exactly, but a device suggesting something about one reality and another yet to be determined. I’m not sure Cindy Bernard would even characterize this work as abstraction – its constituent parts might be more easily categorized as ‘pattern and decoration’ – but in their various fragmentations, juxtapositions, reconfigurations, and placement, they construct a fresh syntax of relationships, correspondences, and color harmonics. That we ‘read’ certain elements as flowers, symbols, patterns, etc., only augments the power of their abstraction. –– Ezra Jean Black, Artillery, June 7, 2017

Since 2016, I’ve been using watercolors to push and pull at the boundaries between documentary, representation and abstraction. I first explored this on-going theme in early works such as photographs of fabrics which resembled abstract paintings (1985-1987) and the Security Envelope Grid (1987-1993), a 100 part work consisting of photographs of graphic patterns used in bank envelopes to conceal their contents. 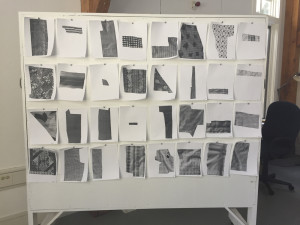 This new body of work was initiated during a 2016 MacDowell residency. I used photographs taken of a crazy quilt purchased in Newfoundland to “reverse engineer” the quilt. I cut the quilt apart digitally, then created one painting for each of the 123 panels. Fabric patterns too detailed to render were represented as gray monochromes. I then used the same photographs to render the panels in their adjacent relationships at 1:1 scale. To date, all of the watercolors start as graphite tracings from photographic templates and incorporate camera lens distortions as well as the damaged, sagging and rumpled fabric of my source.

(Clicking on one image opens up all, move through them using the arrow keys)