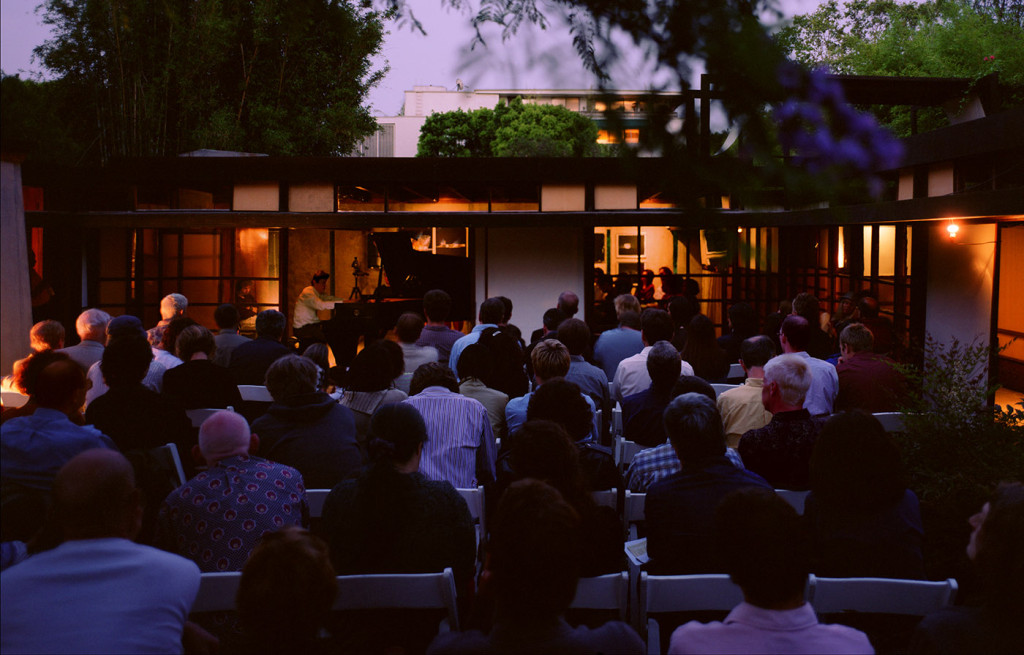 In the Summer of 98, I had two small studios at Angels Gate Park in Pedro: G5 looking towards the harbor and Watt’s “practice pad” and F1 next to a metal band and facing the open sea. Inspired by bass and thrash and fueled by a Guggenheim fellowship, I organized angels gate dusk 8.16.98: installations + trios pulled from a hat – twelve musicians names were pulled from a hat to form four improvisational trios which performed inside an old meeting hall. Six artists created installations scattered throughout the park.

The jam has two trajectories – one (primarily) aural and one (primarily) visual…The premise is that artists are often thrown together within a space by an outsider (usually a curator) and forced to deal with each other. Through that tension interesting things can happen. I am asking a group of musicians (some of whom are also artists) to deal with each other in a similar way…to confront the resonances that occur (or not) and collaborate over the course of a few hours. In a way it’s taking what artists always have to do spatially and applying it to a medium that deals with space and time….

So over the course of one evening the audio and visual trajectories of this idea intermingle: the sound is audible from the art installations outside the building and the art is visible from inside the performance space.

angels gate dusk spawned sound. at sacred grounds and three motivating principals: encourage new relationships through unusual improvisational combinations, guarantee the musicians compensation for their labor regardless of door and provide a comfortable place for the audience to listen. Watt introduced me to Liz McConnachie at Sacred Grounds whose open mind and ears paved the way. It worked for 16 months. Liz convinced Dave, the manager, to limit cappuccino sales to breaks between sets and Howard Sacks passed a few checks my way to pay musicians and record the shows. But gradually economic realities intervened and by the time of solo strings in April 2000, cappuccino cash register dish clatter chaos reigned.

sound. at the Schindler House evolved from space, climate, light, mood , a performance organized as a part of my solo exhibition in February 2000. Opening the canvas doors allowed diagonal movement through interior and exterior spaces containing live or mixed sound: Gabie Strong, David Patton and Ron Russell improvised for 2-1/2 hours while Joseph Hammer and Joe Potts mixed and Tom Recchion recorded. The audience became the focal point of chance mixes as they wandered on the grounds, experiencing sound, projections, rain and the warmth of several lit fireplaces.

Excited by the unique acoustics of the Schindler House as well as by the mix of constituencies drawn by the combination ofexperimental music and art at an architectural landmark, I immediately proposed another concert: Solid Eye and Extended Organ. 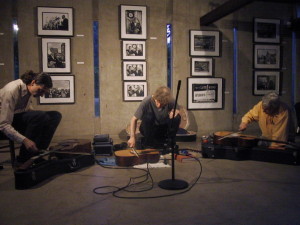 Voice of the Bowed Guitar performs at the first sound. at the Schindler House concert, June, 2000 (organized by Cindy Bernard)

The director at that time, Daniela Zyman, suggested a series. Joseph wisely recommended using the natural resonance of the House for un-amplified music and that first summer opened with Voice of the Bowed Guitar in June 2000 and closed with Extended Organ in September.

2002 marks the third summer of sound. at the Schindler House as well as the formation of SASSAS (The Society for the Activation of Social Space through Art and Sound) whose mission is to increase the visibility and availability of experimental art and sound practices. soundCd no. 1 is the first official SASSAS project – a second volume is planned for 2003.

www.soundNet.org (1), in addition to broadening the distribution of complete sound. performances, will feature new commissioned work designed for the web. www.soundCommons.org (2), a co-op, will host a mailing list and facilitate new experimental web collaborations.

I continue to be excited by the resonance that occurs when experimental music is combined with unconventional performance environments and by the relationships that are fostered though new collaborations and improvisation. SASSAS exists to further these ideas. Thanks for listening.