Édouard Manet, Music in the Tuileries, 1862 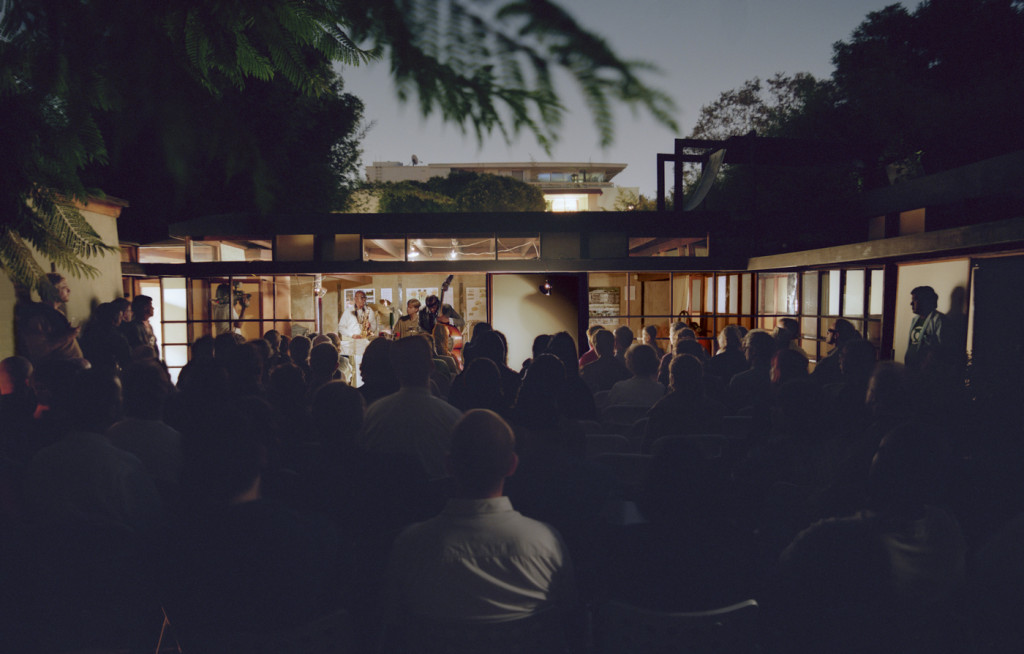 …Bernard is a photographer who also organizes experimental music events in Los Angeles. Some of her color photographs are related to the events she organizes. Others are part of a recent taxonomy of band shells in the American Mid-west.

Her exhibition, too, has only two pieces. One is based on a document of a 2003 performance in which Joseph Jarman,, a member of the Jazz Ensemble of Chicago*, played with colleagues at the famous Schindler House. The other is of a stage and empty seats in a Los Angeles veteran’s hall that has been prepared for a concert in 2001.

Both images are shot from a distance. The 2003 concert is shown in a composite Bernard created to give equal weight to audience, musicians and architecture. The 2001 stage preparations are pictured in a more orthodox architectural study, though a single figure performs some indecipherable action a the side of the picture.

As with Grigely, Bernard has a relationship to earlier painting. She scales all her images to the size of Eduard Manet’s canvas, “Music in the Tuileries Gardens,” which in turn cues us into the important parallel regarding sound. Bernard, like Grigely, attempts to make a certain kind of sound, or its absence, visible. The theme that runs through both shows is, in a variation of Grigely’s words, speech or music through sight, and it’s delicately, beautifully handled. – Alan G. Artner, Chicago Tribune

*the author is referring to the Art Ensemble of Chicago